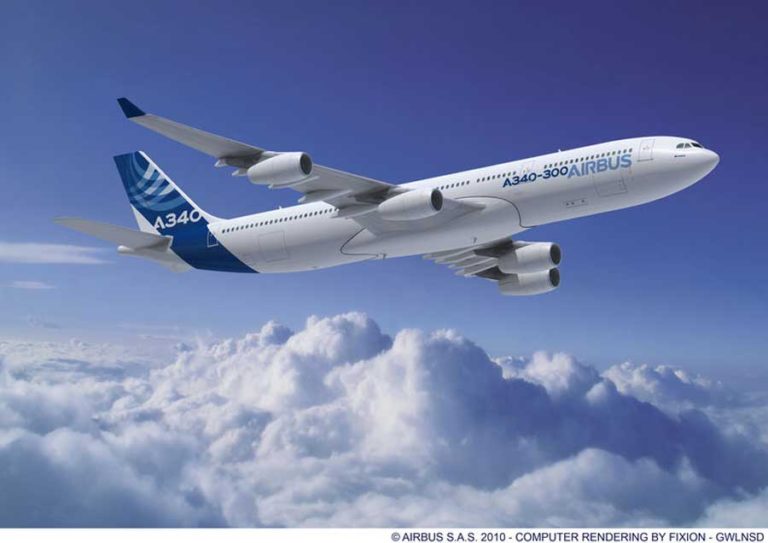 Efficient lift for the long haul

The A340 has earned its reputation as a true globe-trotter – flying some of the world’s longest and most demanding routes while providing superior operating economics – even in challenging “hot and high” conditions – and excellent passenger comfort.

The four-engine A340 has greater range at lower cost than other long-range widebody commercial jetliners and the aircraft’s extended reach and spacious interior also tailors it for VVIP and government use with highly discerning customers.

A340-200
The shortest-fuselage member of the A340 Family is optimised to cover long, direct routes.

A340-300
The quietest mid-size airliner in the sky offers a unique match to evolving competitive environments.

A340-500
Ultra-long range is combined with excellent comfort and in-flight services on the most extended routes.

A340-600
As one of the longest-fuselage airliners, this global performer is renowned for its interior comfort

Powered by four engines, the A340 operates independent of restrictions that apply to twin-jet airliners, allowing direct flights to destinations – even on extended over-water routes and across unforgiving terrain.  It also enables operations from airports at high altitudes and climatic conditions that would be off-limits to other aircraft.

The A340 has amassed some impressive numbers: Over 600 million passengers have flown well over 20 million flight hours and 2.5 million flight cycles with airlines flying A340s as long as 16 hours per day. Over 370 A340s have been ordered.

As a member of Airbus’ modern aircraft product line, A340s enjoy full advantages from the company’s jetliner family strategy, including its application of digital fly-by-wire controls and a modern cockpit. Utilising the same basic fuselage and wing as Airbus’ twin-engine A330, the A340 shares similar airframe structures, components and systems – providing a true aircraft family with different versions to meet operators’ varied requirements.

This system and operational commonality applied across the company’s product line facilitates the support and maintenance of A340s worldwide, while ensuring access to a wide base of qualified pilots who are rated on Airbus’ fly-by-wire aircraft. Qualified pilots can transfer to the A340 in three days from the A330, or seven days from the A320.

Airbus fully supports the A340, allowing operators to benefit from the high level of spares and operational commonality with the best-sell

Backed by the resources of Airbus, the A340 has been continuously improved ensuring the continued value that users expect – proven by the 99 per cent operational reliability.

Sharing the same technology and as part of the same industrial programme as the best-selling widebody the A330, the A340 is built around modern technology.

In addition, Airbus  has introduced performance improvement packages, increases in operating weights, greater fuel capacity, new manufacturing techniques, more powerful engines specifically for the A340 and is working with certification authorities to increase the maximum passenger capacity of the A340-600.
Make a request See the company website Product sheet