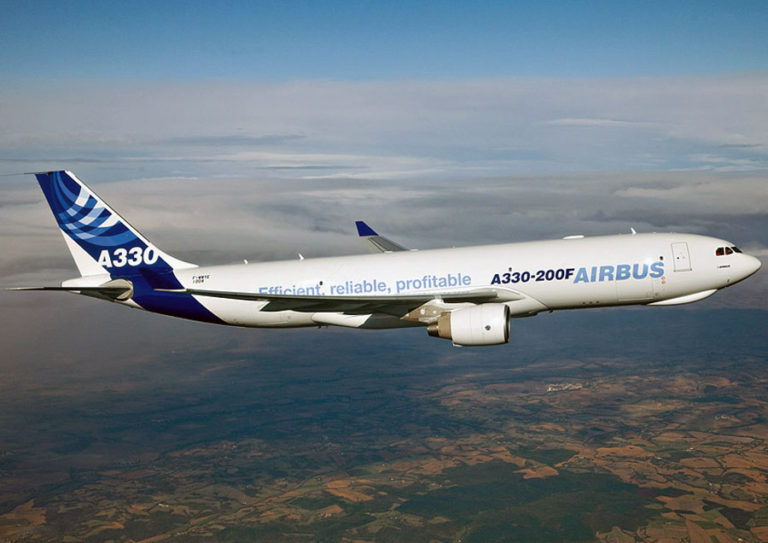 THE A330-200F FREIGHTER PROVES ITSELF IN COMMERCIAL SERVICE

Since its service entry in 2010, the world’s most modern mid-size freighter – Airbus’ A330-200F – has established itself by providing reliable, flexible and profitable operations to all continents.

Major cargo carriers around the world have turned to the A330-200F for long-haul and regional missions as the aircraft has attained a reliability rate of more than 99.6 per cent and in-service utilisation up to 400 flight hours per month.

Customers have praised the A330-200F for its outstanding flexibility, which is further enhanced by the freighter’s full operational commonality with Airbus’ fly-by-wire family of single-aisle and widebody jetliners. In addition, the A330-200F’s large main-deck cargo door allows the aircraft to accept all commonly-used pallets and containers, enabling the transport of a full range of cargo – from high-value consumer goods to express packages and perishables.

Ideally suited to the rapidly changing market conditions, the A330-200F is shaping the future of air cargo transport. The flexible mid-sized aircraft offers operators an adaptable cargo strategy with up to 35 per cent lower operating costs per tonne compared to larger freighters, as well as optimised load factors.

As a new-generation freighter derived from Airbus' proven A330 jetliner family, the A330-200F offers highly efficient operation with less noise and emissions than the ageing fleets of mid-sized cargo aircraft used in worldwide service today.

In addition to offering better payload, range and economics than previous-generation freighters in its class, the A330-200F also provides the full benefits of operational commonality with Airbus’ fly-by-wire family of single-aisle and widebody jetliners.

It represents an ideal replacement for obsolete first-generation widebody freighters, and also provides airlines with a highly efficient all-cargo solution to replace services of passenger and cargo “combi” aircraft.

Since entering service in 2010, the A330-200F has demonstrated its attractiveness as a flexible, reliable and profitable freighter for the cargo operators, aircraft leasing companies and financial organisations that have ordered the aircraft around the globe.

With the capacity and range to profitably serve growing global cargo markets, the A330-200F offers significant opportunities to grow frequencies in underserved markets at no additional cost per tonne.

Overall flexibility has been enhanced with the introduction of Airbus’ versatile main-deck cargo loading system, which can accommodate all industry-standard containers and pallets – enabling operators to serve the freight lift needs of varying markets.

The A330-200F can transport up to 23 side-by-side pallets on its main deck, with flexibility for additional arrangements such as single-row loading of 16 pallets, and a mix of 9 AMA containers with four pallets. The spacious lower-deck cargo hold accepts up to 26 LD3 containers, plus 19.7 cubic metres of bulk cargo.

This modern cargo jetliner utilises a wide range of innovations that make it the most economical and ecological freighter in service today. Among these cost-reducing features are the aircraft’s reinforced fuselage and doors, which increase shear and bending/running loads; its use of the latest in eco-efficient engine technologies for reduced CO2 emissions and noise levels; along with a “glass cockpit” and advanced navigation systems for enhanced flight operations.
Overall length
58.82 m
Height
16.88 m
Wing span
60.30 m
Max payload
65 (70) tonnes
Range
up to 7400 km
Mmo
M0.86
Max take-off weight
233.0 tonnes
Max landing weight
187.0 tonnes
Make a request See the company website Product sheet