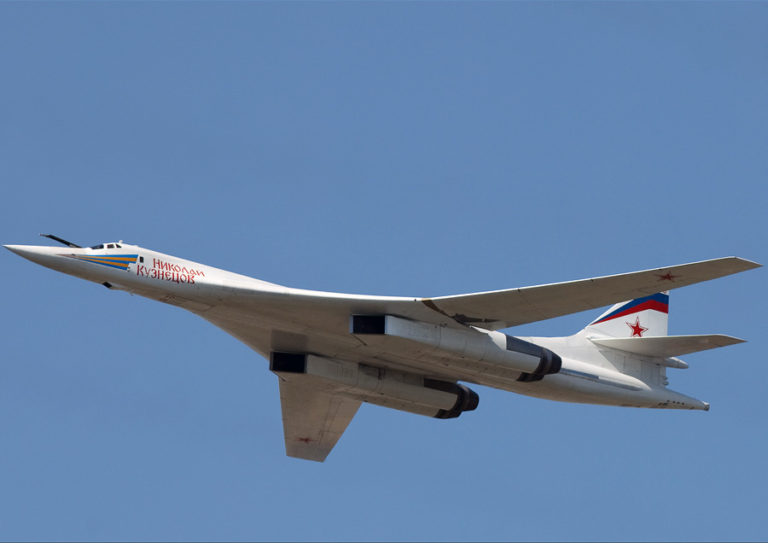 Intercontinental strategic multi-mode missile carrier aircraft armed with long-range cruise missiles. Work on the project began in the bureau in the early 1970s. By the mid-1970s the concept of the aircraft and the complex has been formed. The first flight of the prototype was performed on December 18, 1981, test pilot was B.I. Veremey. Tests of the first serial aircraft began in October 1984. In April 1987 aircraft Tu-160 entered service in combat maneuver unit of long-range aviation in Ukraine. In the beginning of the 2000s 36 aircraft Tu-160 were produced.

Aircraft Tu-160 is developed on a low faired integral scheme with variable swept back wing, tricycle landing gear, all-moving stabilizer and fin. Wing flap system includes slats, double-slotted flaps, for roll guidance spoilers and drooped ailerons are applied. Four engines are installed in pairs in nacelles at the bottom of the fuselage. TA-12 APU is used as a stand-alone power unit.

Two compartments of useful load are situated in sequence (one by one). The basic airframe materials are titanium, heat-treated aluminum alloys, steel alloys and composite materials. The aircraft is equipped with a lavatory, a kitchen, sleeping accommodations. The aircraft is equipped with a refill system receiver "hose-cone" type. Airframe components such as wings and engine compartments were put into serial production at Voronezh aircraft factory, the fins and air scoops were produced at Irkutsk aircraft factory, landing gear was developed at Kuibyshev Assembly Plant, the fuselage center section and components of half wing pivot at the Kazan aviation plant.

Other products from Tupolev